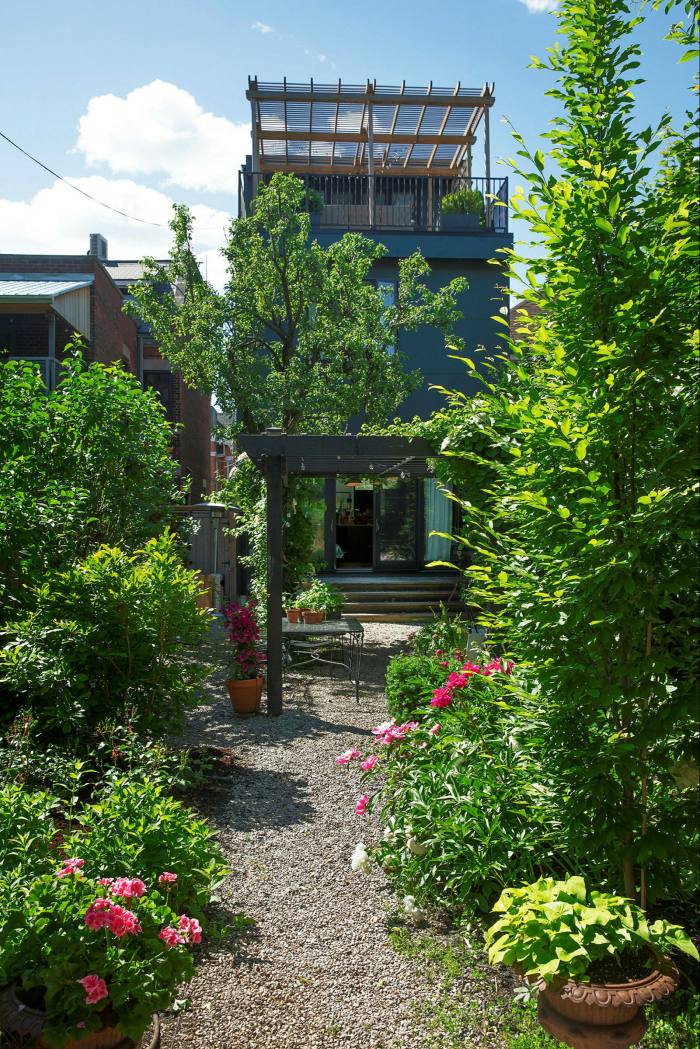 When Virginia Johnson and her husband Louis Trochatos were property hunting just over a decade ago, she regarded a garden as merely an appendage to a house. Her husband felt the same way.

“Neither of us were gardeners,” the clothing designer and artist says.

The outside space that came with their Toronto home was just 7 metres wide by 24 metres long and uninspiring: “a nothing”, according to Johnson.

The sliver of garden was typical in their neighbourhood of Little Portugal, located on the west side of the city and comprised of narrow, Victorian homes where outdoor space is at a premium. “It was unfenced, with grass overrunning into the neighbours’ on each side,” she says of the space at the rear. “The front was an ugly evergreen tree.”

A decade on, the space is a lovingly tended oasis, with shrubs, flowers and more than 20 trees. The transformation is the subject of Creating a Garden Retreat: An Artist’s Guide to Planting an Outdoor Sanctuary, which documents the change in Johnson’s attitude and tells the story of how she created her urban oasis.

“The artist in me has shaped my garden, in its tones, shape and balance. I’d always been interested in flowers for my textile designs but not in gardening,” she says. In her book, she writes that she is “always looking at my garden as if I’m going to paint it”.

She approaches planting as she does her textile design, by first compiling a mood board, then working out which colours work together. “My life and work are based on colour,” she writes.

“I’ll look at it from my studio and then from the house to ensure the plantings have a nice balance.” She assesses its overall composition and within that, its different shapes, colours, textures and heights, but in an asymmetrical way. “I don’t want a perfect garden,” she says. “That’s just not me.”

While Johnson says there was “no one moment” when she became a gardener, she dates the transformation from the birth of her children, Ben, now 12, and Georgia, 10.

“When you have kids you become more housebound, whereas before I’d never had time to sit in a garden.”

Johnson has travelled a substantial journey in her relationship with gardening. For years, she says, she owned a garden while single but barely set foot in it. It was left to its own devices: a friend called it “God’s garden”.

She knew even less than she cared. On her visits to London, Johnson assumed that the painstakingly designed flower beds and borders sprang up by accident.

“I had no idea that anything planted was deliberate,” she recalls. “I thought that it grew like that. I walked through your parks and past gardens like Eaton Square and assumed all those plants were there through nature.”

Johnson saved her energy for her work as an artist and fashion designer, creating and illustrating for clients including Prada, Anthropologie, Liberty London and Kate Spade.

“I never did any gardening because I was too busy working, then running my business. And I just wasn’t interested.”

The demands of a toddler and a baby started the transformation. Johnson fenced off the back garden to keep them safe and installed a sand pit and tiny lawn. At the front, she chopped down the evergreen and, struck by how awful the patch still looked, hired a landscape gardener to create a supposedly low-maintenance space. “It looks beautiful now, with hydrangeas, small pear trees, pachysandra and narcissi. It takes a lot of maintenance though,” she says.

The back looked all the more dire by contrast with the reworked front and Johnson started to contemplate how to make it less bleak. She realised that the garden offered her more scope for creativity than the house, which is a compromise between her and Trochatos’s divergent views on architecture and decor.

“Louis likes modern things,” Johnson says. “He hates nooks and crannies, doesn’t see the point of bay windows, and dislikes second-hand furniture, which I am always bringing home. At one stage I thought we’d never agree where to live because this street is full of Victorian houses, which he hates.”

The couple were fortunate that a 1920s, two-storey box to suit Trochatos’s tastes came up for sale. “It’s a compromise,” she says. “I’ll never have the big, rambling house that I’d really like, so that’s why the garden became so important to me. It’s 100 per cent my domain.”

It has, says Johnson, 49, been a gradual process. The children had their sandpit, so in 2013, she erected a pergola for “somewhere civilised” for the adults to sit. Once she was ensconced beneath it, she recognised that she needed more privacy from the neighbours. That prompted her to buy four lilac trees from Home Depot, the hardware store.

“I didn’t know there was a difference between trees and shrubs at that stage,” she recalls. “I didn’t know anything about lilac either. I just bought them because I liked them.”

The challenges accumulated. Having planted the lilac trees, Johnson realised she needed screening for the other side. She sought inspiration from the landscape gardener who had redesigned the front but neither her suggestions for a modern rear garden — nor the price tag — appealed.

Not relishing the prospect of sitting through gardening programmes or trawling through books for design ideas, Johnson settled on a little-by-little approach.

“I’ve always been an on-the-back-of-a-napkin kind of person. When I started my fashion design company I didn’t have a business plan. I built it up bit by bit, doing illustrations on the side until I could afford to pay myself a wage.”

Whenever she spotted a plant she liked, she would research it first, Johnson recalls.

“I didn’t want to spend a lot of money before I knew about the plants,” she says. “And at that time it still seemed to me that gardening should come free. Why should I spend money on my garden?”

Reading magazines, blogs and case studies of long, narrow city gardens persuaded her that she would need to put some financial investment into the project. “I didn’t resent that once I realised that I would have to put my own plants in,” Johnson says. “I like spending money, too much so really.”

It still took her two years of researching hornbeams before she opted to buy a row of them for screening.

By this time, Johnson was seeking a combination of beauty and privacy. She bought a climbing hydrangea for the pergola, to remind her of childhood holidays at her grandparents’ house near Toronto.

“It was a lovely country garden and I realise that my idea of a garden as a peaceful place comes from that time,” Johnson says.

It has been a process of learning. In the early days, Johnson killed a magnolia tree because she was too shy to ask how to water the tree when buying it.

“I’ve found that garden stores aren’t good at putting on labels on how you should care for plants,” she says. “Yet so many people must be amateur growers when they visit garden stores, not knowing the difference between perennials and annuals, or whether they should bring plants indoors for the winter.”

Such setbacks have been overcome. After making only slow progress initially, the designer has taken far bigger strides in reshaping the space over the past three years. After her children grew older, the sandpit was removed and she built a work studio at the end of the garden. It kicked off a rash of planting, including peonies, hollyhocks, roses, hydrangeas, pachysandra and narcissi. The hydrangea now totally covers the pergola and trees include junipers, hornbeams, magnolia and yew.

The garden is, she says, her urban oasis. “It became my dream to create a beautiful garden. A magical, private space bursting with plants to sit in with my family and friends, or just having a coffee and reading on my own.”

Lockdown emphasised how important the garden has become for the family, although she says that Trochatos, Ben and Georgia have been less enthusiastic garden labourers than she would have liked. “I had hoped they’d come out a bit more with their shovels.”

I’ll never have the big, rambling house I’d really like. That’s why the garden became so important to me. It’s 100 per cent my domain

The work continues. Despite the wide range of plants, it remains less full
than she would like. She is wondering whether to rectify the shortcoming by planting more junipers.

She has also concluded it was a mistake to plant a row of pleached apple trees whose branches are trained on trellises. “I’ll give them away. They just aren’t me. I find them too prim and too much work.”

She hopes her garden’s story will inspire others. “It’s not intimidating and creating a garden is accessible to anyone,” she says. “It’s not been about creating the perfect garden; it’s about a journey of discovery.”

She feels she still has “decades” of learning ahead, she says. “To me that’s very exciting.”

In the short term, a more urgent task awaits. “My mum has given me an envelope she found that contains hollyhock seeds my granddad saved in 1976,” she says. “I don’t know if they’ll grow after all this time. But I’ll certainly give them a try.”

“Creating A Garden Retreat: An Artist’s Guide to Planting an Outdoor Sanctuary”, by Virginia Johnson (Artisan, £18.99)