Kelly Clarkson spent the holiday weekend taking care of business as she continues to settle into her new $5.44million Los Angeles mansion.

The 39-year-old country star-turned-TV host was spotted moving furniture items and boxes in LA on Monday while most Americans recovered from a night of Fourth of July festivities.

The singer was joined by a female friend and older sister Alyssa Clarkson as she unloaded boxes at a UPS store in Toluca Lake before moving on to a storage facility where she was seen dropping off some home goods and furnishings.

Scroll down for video 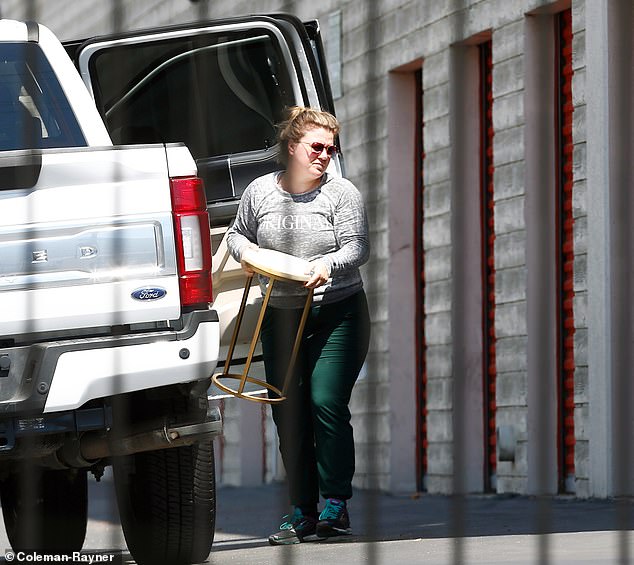 Moving day: Kelly Clarkson appeared to forgo Fourth of July festivities on Monday to run some errands in Los Angeles instead 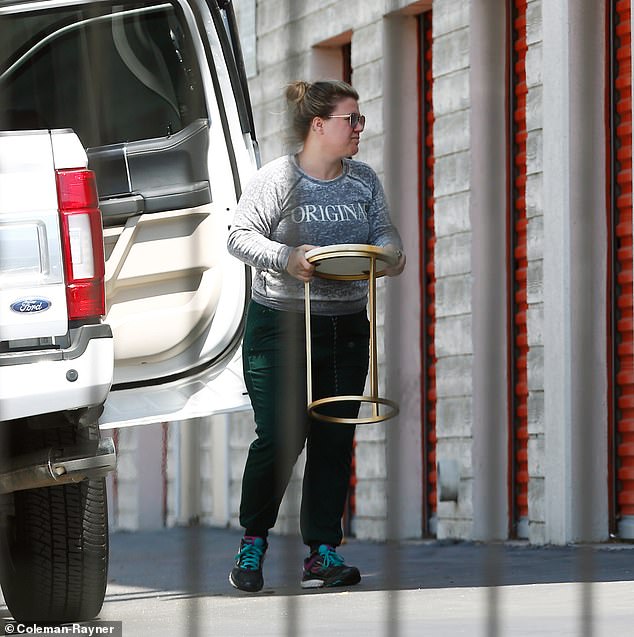 The 39-year-old was spotted moving furniture items into a storage facility in LA as she continues to settle into her new $5.44million home 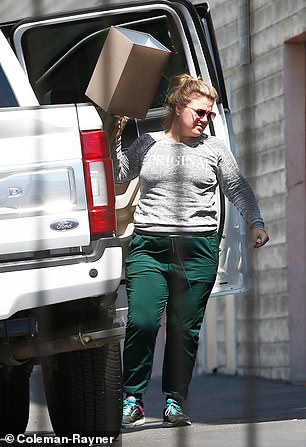 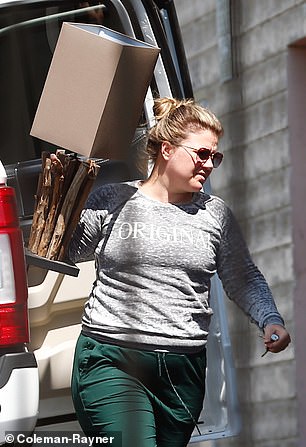 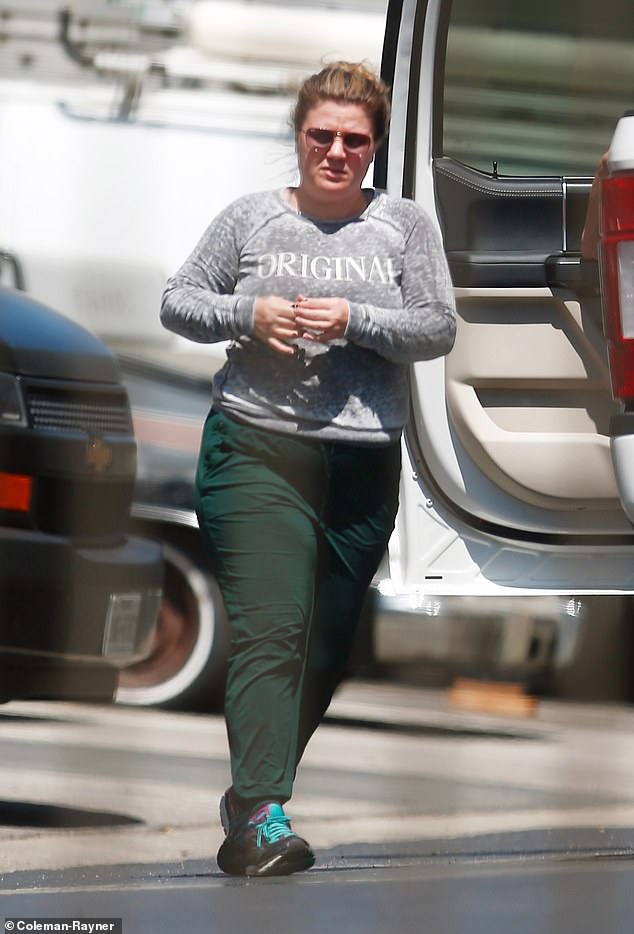 Comfortable and casual: Kelly came dressed for a day of manual labor, opting for some comfy green track pants, a gray sweatshirt, and sneakers

Exclusive photos obtained by DailyMail.com show the three ladies were in for some heavy lifting as they arrived with a fully loaded cargo bed in their Ford F-150 pickup truck.

She pulled her hair back in a messy bun and carried a Chanel Paris-Salzburg Austrian crossbody bag.

The outing suggests Kelly is still settling into her new home all while trying to offload two other properties amid her ongoing divorce from husband Brandon Blackstock.

The American Idol alum was reported to have snapped up a $5.44million Colonial-style home in the Toluca Lake neighborhood in June, just a few months after finally selling her Tennessee mansion for $6.95million.

The mom-of-two also owns a house in neighboring Encino – the last residence she shared with her estranged husband – that she is also now selling for nearly $10million. 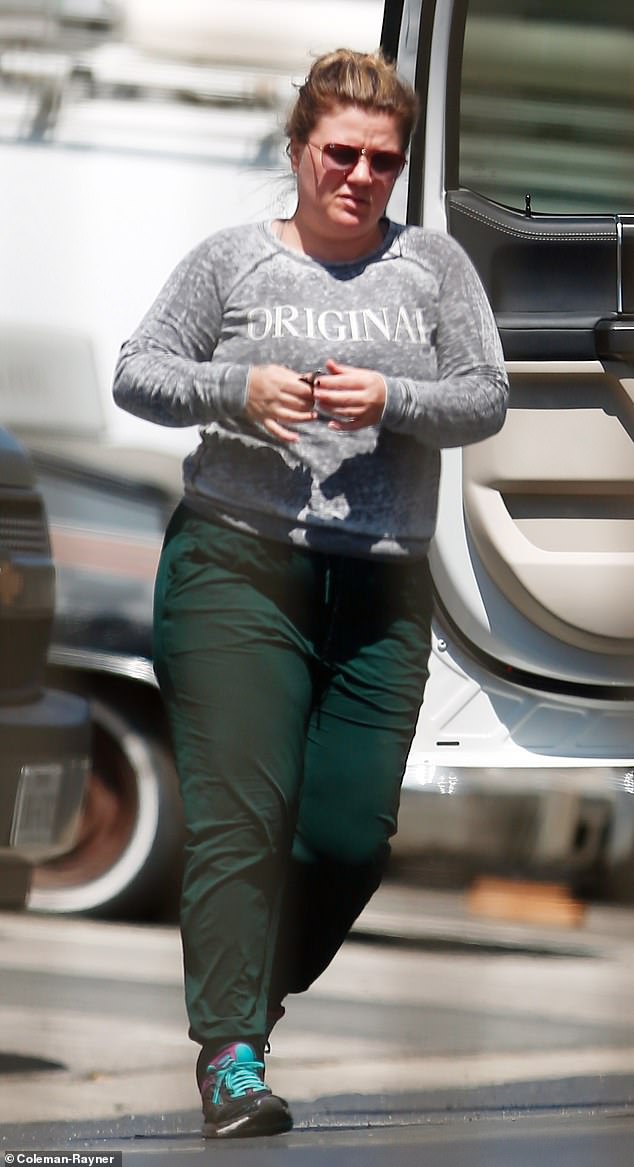 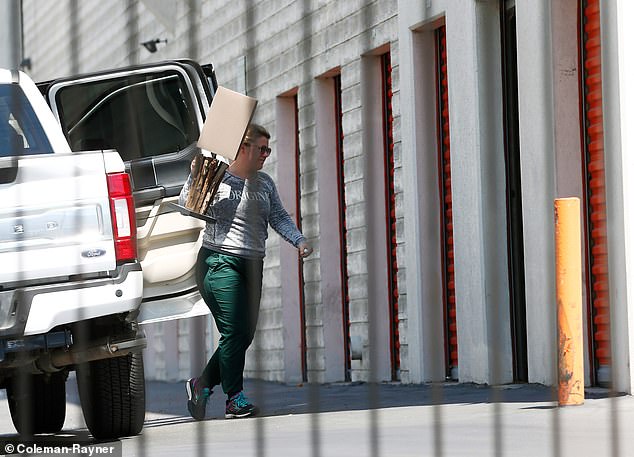 The mom-of-two unloaded an accent lamp, a decorative end table, and other home goods from a pick-up truck before storing them in the unit 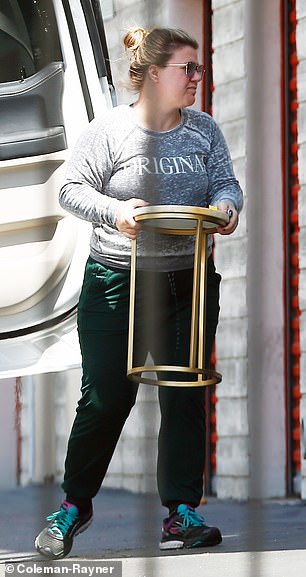 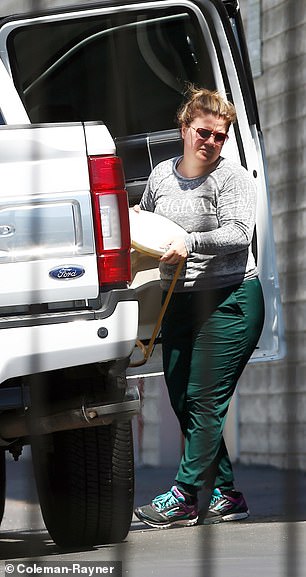 Putting in work: The outing suggests Kelly is still settling into her new home amid her divorce from husband Brandon Blackstock 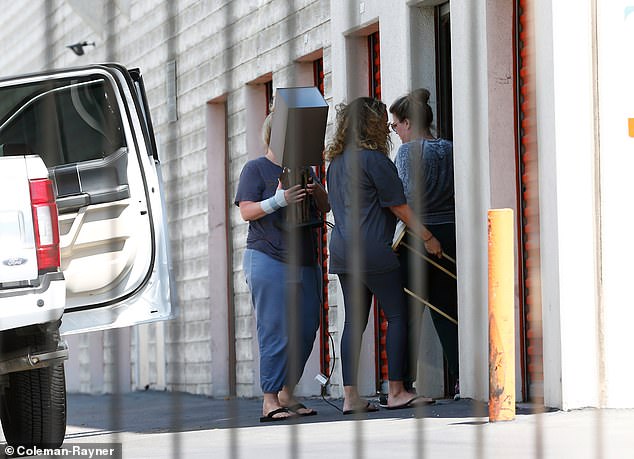 Helping hands: The singer-turned-daytime talk show host had some help from a friend and her older sister Alyssa

One of the more impressive features of the home is perhaps the gorgeous kitchen, decked out with tile flooring and a massive island counter.

The house also has a sprawling lawn in the backyard, ideal for her two young children to play and run around on.

The real estate venture came after it was announced that Kelly’s eponymous NBC daytime talk show would be filling the time slot void left by The Ellen DeGeneres Show once the comedienne’s long-running series comes to an end next year.

The Kelly Clarkson Show has become a hit thanks to the host’s winning personality, casual interview style and high-profile celebrity guests. 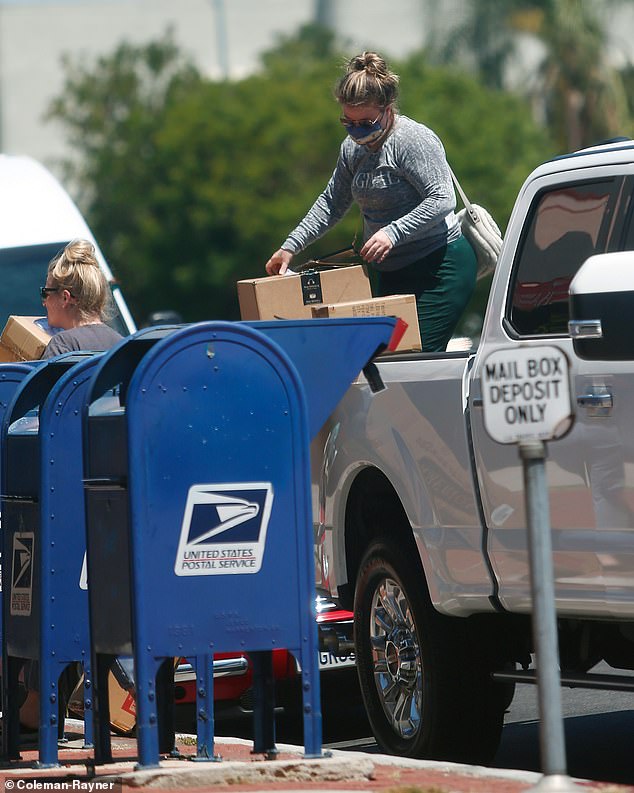 Earlier that day, the group was seen stopping by a UPS store in Toluca Lake to drop off some packages 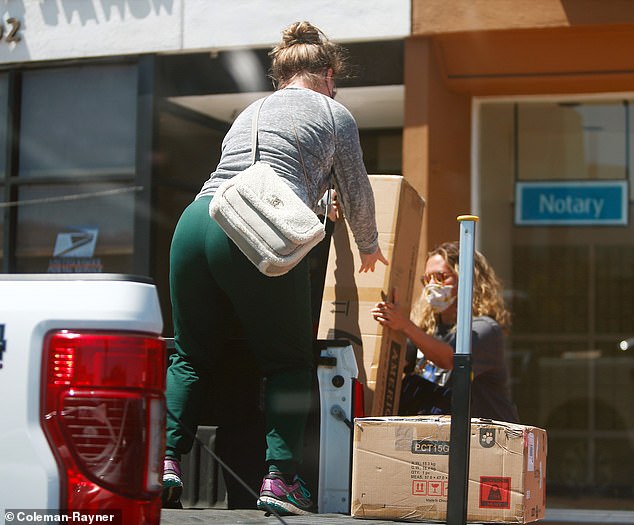 Teamwork: Kelly unloaded boxes from the pick-up truck while a friend carried them inside 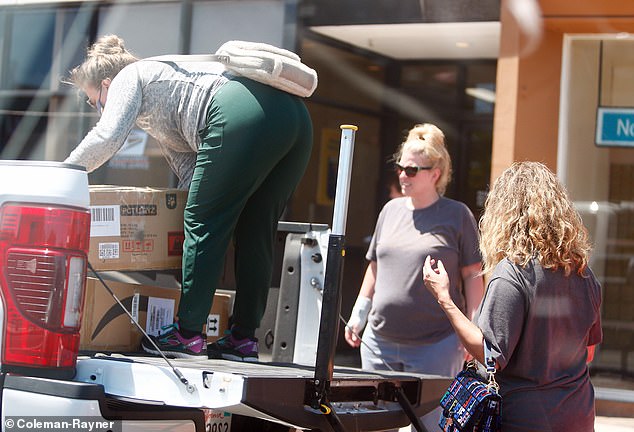 Exclusive photos obtained by DailyMail.com show the trio were in for some heavy lifting as they emptied out the fully loaded cargo bed of a Ford F-150 truck 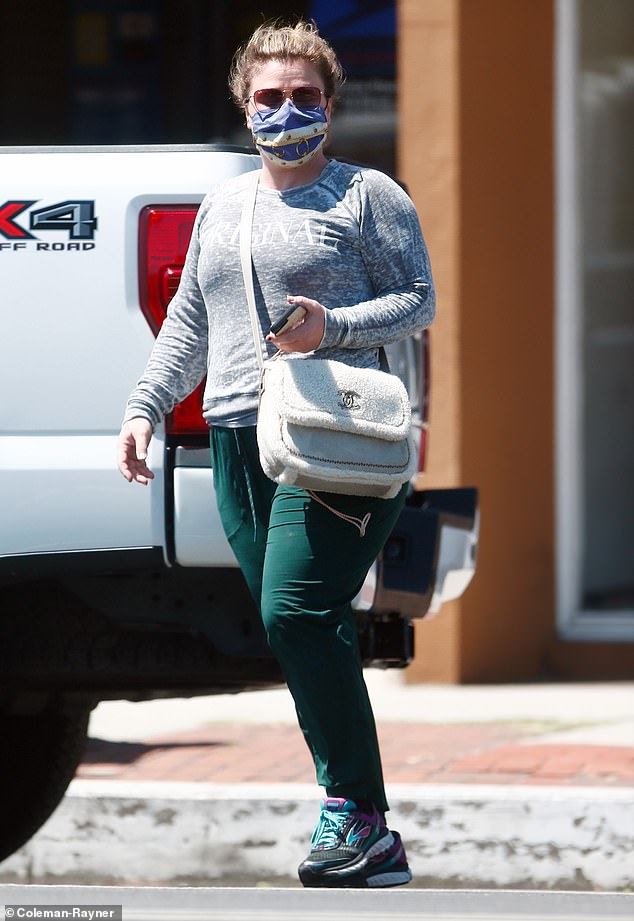 It is currently in its second season and was renewed late last year for two additional runs that takes it through 2023.

The star’s professional success, however, comes in the midst of her bitter divorce from husband of seven years, talent manager Brandon Blackstock, 44.

In documents filed in a Los Angeles court last Thursday, Kelly requested for a judge to declare her legally single a little over a year after she first filed for separation, People magazine reported.

Although the two are still in the process of finalizing other arrangements such as spousal and child support, Kelly told the court that she and Blackstock ‘both deserve the opportunity to build a new life.’

Kelly filed for divorce last June citing irreconcilable differences and has since been awarded primary physical custody of their two children. 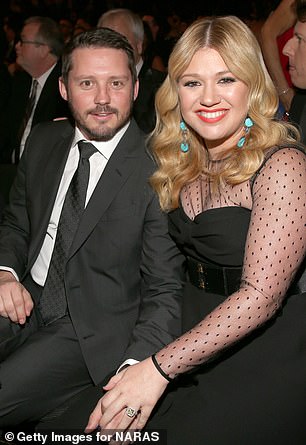 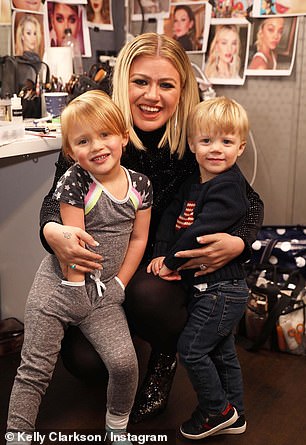 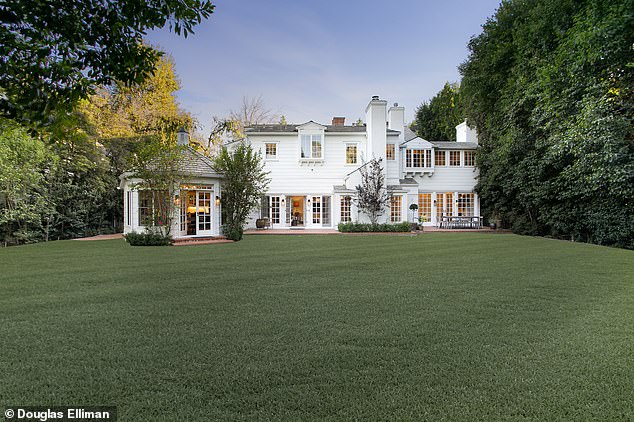 Late last month the American Idol alum was reported to have snapped up this stunning Colonial-style home in Los Angeles for $5.44million 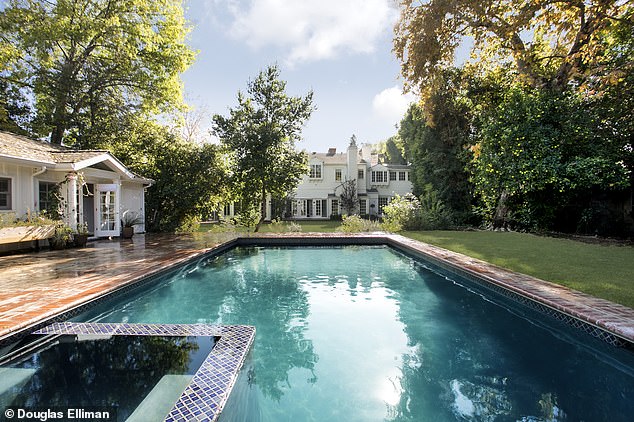 Boasting 5,000 square feet, the new property has five bedrooms, seven bathrooms, a swimming pool, spa, and tennis and basketball courts, as well as a guest house

The couple had married at Blackberry Farm in Tennessee in 2013, and later welcomed daughter River Rose, six, and son Remington Alexander, four.

The pair’s legal battle took a messy turn last October, when Kelly’s father-in-law Narvel Blackstock filed a lawsuit alleging she still owed them $1.5million in commissions and $4million from her paycheck for judging The Voice.

Kelly fired back with a counter-suit, claiming that her agreement with the Blackstocks and their company Starstuck Entertainment should be voided and she should be reimbursed for all prior fees because they were providing ‘illegal services’ under California’s Talent Agencies Act for working without a license and failing to act in the ‘best interest’ of their client.

‘We stand by our allegations that Starstruck violated the Talent Agencies Act, despite their boilerplate denials, and we look forward to trying the case before the Labor Commissioner in August,’ her team said in a statement. 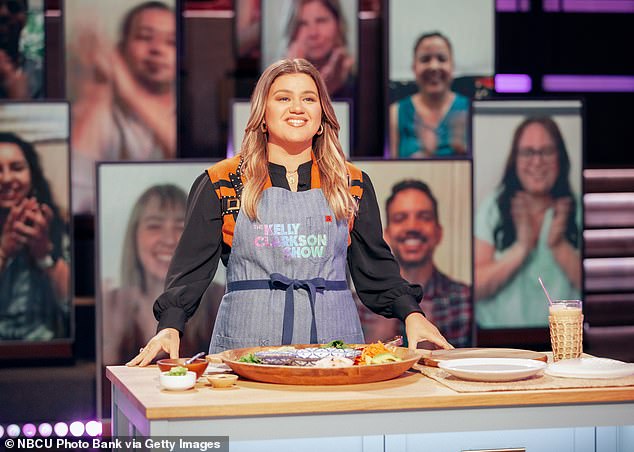 Tune in! The Kelly Clarkson Show is currently in its second season and was renewed late last year for two additional runs that takes it through 2023

out of state homebuyers impact buying a house

Tue Jul 13 , 2021
East Tennessee’s booming real estate market is attracting out-of-town homebuyers. That added competition for homes, combined with low inventory and an increase in home prices, is making it more difficult and expensive to buy a house in the Knoxville area.  According to the Freddie Mac Housing Price Index, Knoxville’s May home prices […]