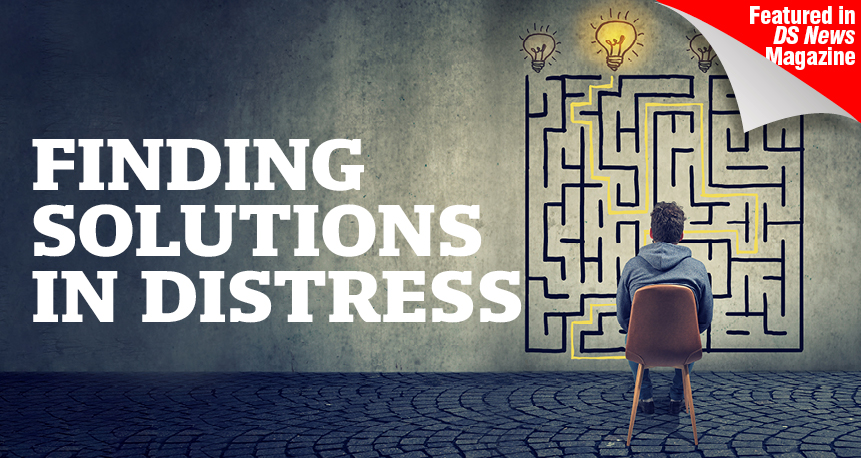 For much of this past year, the residential real estate industry has faced a perfect storm of sky-high pricing and demand and severely constricted supply. Bidding wars for existing homes are the norm, new home builders are struggling to fill the gap, and buyers are bewildered. However, the solution may be closer than we think—in the form of distressed homes.

The Inventory Issue
A recent National Association of Realtors report reflects a staggering statistic: the U.S. housing market is facing a historic underbuilding deficit of 5.5 to 6.8 million units since 2001. “New home supply has been an issue since the 2008 housing crisis, and the pandemic has worsened the imbalance,” notes Suzanne Mistretta, Fitch analyst.

The latest housing numbers underline the current supply situation with unsold inventory at a 2.5-month supply and properties typically on the market for a swift 17 days.

“Lack of inventory continues to be the overwhelming factor holding back home sales, but falling affordability is simply squeezing some first-time buyers out of the market,” observes Lawrence Yun, NAR Chief Economist.

Millennials and other would-be homebuyers are facing record-high prices for existing homes with the median price up almost 24% to $350,300. The latest CoreLogic Case-Shiller data reflect the highest prices in more than 30 years.

This would logically suggest an opportunity for boomers to make a big profit trading in big homes for smaller ones—opening the door for younger buyers to get into older, less expensive homes. The question in 2021 is … they go once they sell?

“The bigger factor is just availability of supply to move into … There’s nothing to go buy or downsize into,” according to Todd Teta, ATTOM Chief Product Officer.

Cue New Homebuilders
Warm weather usually means building heats up, but this year is anything but normal. High prices have also hit the construction market. Skyrocketing lumber costs and labor challenges have driven builders to hold back. Many are waiting as long as possible to go into contract with delays common and future costs uncertain.

Some builders are even going back to buyers for more money or just canceling purchase contracts altogether by way of new “termination of convenience” clauses written into the contract—allowing builders to cancel for any reason.

In the words of one frustrated buyer, “It does seem—to me at least—a rather questionable practice and one where a builder (or builders) is trying to take advantage of the hot housing market and ditching valid contracts so they can resell them to higher bidders.”

A recent survey from the National Association of Homebuilders reports that 19% of builders are delaying sales or construction and 47% have added escalation clauses into contracts, allowing them to lift prices as costs increase. Notably, homebuilding permits fell 3% in May.

“We’ve shut off sales until homes are nearly completed,” Texas homebuilder Greg Yakim commented. “We have huge waiting lists,” Yakim continued. The vast Lone Star State is even running out of space as out-of-state buyers flock to the state.

According to a local real estate agent, “Some builders aren’t even opening the doors in their model homes for buyers. There’s no point in opening the door. If there is any home right now, it will sell within an hour.”

Builders are suppressing orders and getting creative on the new homes they do have for sale. On one recent project, industry giant Lennar stated they “will entertain offers on certain homes in this community rather than publish a specific sale price.”

Industry veteran Phil Crone of the Dallas Builders Association anticipates the new normal of price clauses, multiple offers, and blind auctions is here to stay … for a while longer at least. “It’s going to be a long slog,” Crone said. “I haven’t seen anything like this in my years of doing this.”

It’s definitely a wild new frontier for new homebuyers. So, what’s a buyer or investor to do?

Distressed Housing Offers Hope
The answer is sitting in many of our neighborhoods across the country: distressed properties. What better way to solve the inventory issue than to turn to our existing inventory in this country?

These often older homes are the perfect solution, as existing homes can be bought, updated, and sold faster than a new build. It’s a win for investors, it’s a win for homebuyers, and it’s a win for cities who’ll realize increased tax dollars from rehabbed and reassessed homes.

The White House is taking notice. As part of his trillion-dollar infrastructure package, President Biden has officially announced a Neighborhood Homes Tax Credit to spur development and rehabilitation of affordable homes.

According to the White House brief, “approximately 40% of U.S. housing stock is at least 50 years old and more than 15 million properties are vacant even as families struggle to find affordable housing.”

Investors who rehab older homes would be able to claim a credit on their tax returns, as long as the home itself is located in an area facing gentrification, the homebuyers fit the income profile of the neighborhood, and the sales price does not exceed four times the area median family income.

Distressed Success
In 2020, the average age of the homes New Western sold to investors was 57 years. Investors big and small have found not only success but purpose in renovating neighborhoods across the country. The economic impact on our communities cannot be overstated.

The barriers of entry and timetables between building and remodeling are sizable. New builds are a huge undertaking that often mean a year of work and include major elements like pouring foundation and structural work. Remodeling distressed properties makes for much more manageable projects (think kitchen remodels, aesthetic changes, etc.) that can be done in as little as three months.

New construction also comes with a hefty price tag. The average sales price for a new single-family home in 2020 was $391,900 according to the United States Census Bureau. The National Association of Home Builders recently reported a mere 20% of new homes started were priced under $250,000. As housing affordability remains a hot-button issue, it’s clear new construction is leaving many would-be homebuyers out in the cold. In contrast, the average estimated value after renovation for distressed homes sold by New Western in 2020 was $298,030—nearly $100,000 less than a new build.

Another factor that makes renovating distressed homes attractive is the opportunity for both investors and buyers to actually get into the urban core of appealing markets. Take Austin, Texas, for example, where new builder developments are mostly far outside of city limits in new subdivisions. On the flip side, investors can get into the heart of Austin and remodel an older home in a prime neighborhood. Moreover, because of the current economic conditions, even novice investors have a higher likelihood of achieving success as a flipper right now.

All of that said, money isn’t the only reward. Successful Austin investors Richard and Mimi Bond have done more than 60 fix-and-flip projects in the last four years, but the duo says they are focused on much more than financial gain. “The most rewarding thing for us is that we make neighborhoods prettier and safer,” Mimi notes.

Investors truly have the opportunity to provide much more than a good product. These properties are often the biggest purchase for many new homebuyers, a place to call home, start a family, and—in the new normal of remote work—grow a career.

At the end of the day, the ultimate goal is to improve lives, one neighborhood at a time.