A new single-family home subdivision near Pflumm Woods is getting closer scrutiny after Shawnee city leaders voiced concerns about the proposal Monday night.

Plans are underway for tbe new residential subdivision just south of 55th Street between Noland and Rosehill roads. But neighboring homeowners in the Pflumm Woods subdivision have rallied against the project and submitted a petition protesting a rezoning of the site.

Neighboring homeowners are primarily concerned with traffic congestion, flooding issues and stormwater drainage, and the potential disturbance construction would have on wildlife.

The Shawnee City Council shared some of those concerns on Monday before unanimously remanding a rezoning of the site to the city planning commission for further review.

“I’d say there’s too many loose ends, and I’m uncomfortable with it,” said Councilmember Eric Jenkins.

Overland Park-based Aubry Enterprises is planning to extend 56th Terrace and build 13 single-family homes on about 7 acres just east of the Pflumm Woods neighborhood on a site just behind Ray Marsh Elementary School.

Below is an overhead view of the project: 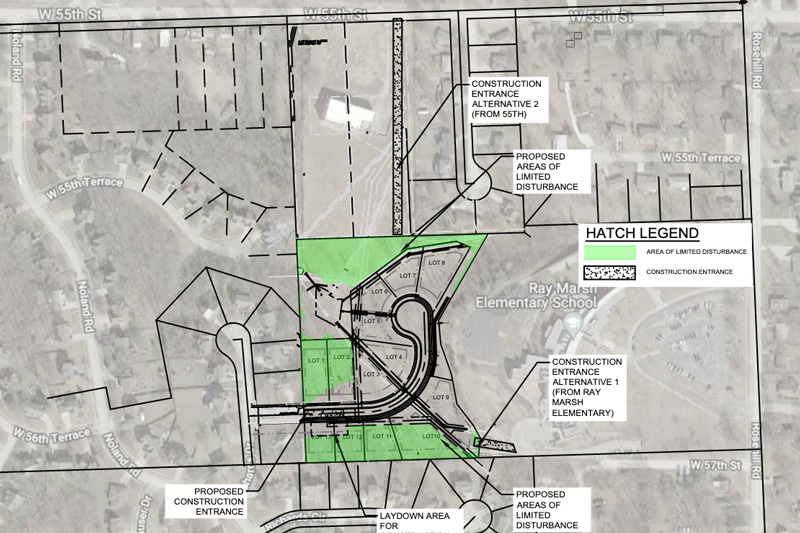 Jay O’Dell with Aubry Enterprises said his team has worked through concerns with the neighbors, but some of those concerns could not be addressed.

Neighbors would rather have no development behind their property, particularly because the city’s comprehensive plan indicated that the site is quasi-public land that should be left undisturbed.

But, if the project does move forward, then the residents say they would prefer the developer get permission from the Shawnee Mission School District to access the construction site by going behind the elementary school, instead of through their subdivision.

The current plans show construction crews would enter the site through Pflumm Woods at West 56th Terrace, which is a cul-de-sac.

The Shawnee Planning Commission is now tasked with reviewing the access points for the project, along with other concerns related to stormwater and sewer work, and public safety needs for the Shawnee Fire Department, among other items.

Joan Gladbach, a homeowner in Pflumm Woods, voiced her and her neighbors’ frustrations on Monday.

“When I bought my property, I was told that [site] would never be developed; I think everyone on our street and everyone that backs up to this property was told the same thing,” Gladbach said. “So rezoning it, even though it sounds like it’s not a big deal, it is a big deal to people that own property next to this land.”

Gladbach was also concerned for the wildlife, including two hawks that nest in the area. O’Dell said the developers will be required by law to safely relocate the hawks if they disturb their homes.

Some of the councilmembers’ discussion Monday centered around the city’s comprehensive plan, a document that guides future land use in Shawnee, which the city is in the middle of updating.

The city’s current comprehensive plan designates the site as quasi-public because of the elementary school.

However, current zoning is actually a mix of single-family residential and agricultural use.

“It angers me that it happens, and it’s something that I’ve worked with the previous city manager, I’ve been working with the current city manager, trying to brainstorm ideas of how…. do we prevent this from happening to people because it’s not fair to you,” said Mayor Michelle Distler. “It’s not the city’s fault, but it’s not fair to you, and I hate that you were told that [the site wouldn’t be developed]. I’m sorry that that happened to you.”

A recording of the meeting is available below and on the city’s website. Discussion begins at 40:58.

Thu Jul 29 , 2021
The worlds of design and athletics collided this week, as Cleveland’s Major League Baseball team took on a new name inspired by the art deco stone landmarks flanking the city’s Hope Memorial Bridge. Stay in the know with our weekly roundup of headlines, launches and events, recommended reading, and more. […]