Tucked down a twisting highland road in North Asheville, Todd and Pam Eveland’s modern dwelling sits nestled into the mountain, with tall trees extending above and below the sloping grade, though none block the south-facing view of rippling blue ridges. Despite its 5,500-square-foot size, the house keeps a relatively low profile. Chevron in shape, with two, double-story wings that trace the mountain’s contour, the house is entirely black and in accord with the forested surroundings. The only exception is the metal roof and the sky’s reflection in a wall of windows. It’s curiously edgy and bold.

The Evelands’ home could be likened to a geode, its dark disguising exterior concealing a glowing radiance and beauty within. But the less obvious surprises here might lie in the great effort it took to build the home—it’s believed to be the largest residential soil pinning project in WNC—and in the architect behind it all.

New York City-based Architect David Gauld may not be widely known in WNC, as the Eveland residence was his first project in the area, but his résumé includes some remarkable milestones.

Educated at Harvard College and Harvard’s Graduate School of Design, Gauld studied and then worked under Arata Isozaki, who’s widely recognized as Japan’s most influential postwar architect, with buildings across Asia, Europe, Australia, the Middle East, and North America. He’s designed everything from art museums and symphony halls to a sports facility for Olympic Games to an inflatable mobile, 500-seat concert venue. In addition to other highly coveted awards, Isozaki’s visionary and versatile work earned him the 2019 Pritzker Architecture Prize, which in the architecture world is akin to receiving a Nobel.

“Some architects develop a signature style, but Isozaki starts fresh with every project,” says Gauld, noting the environment, climate, budget, even the culture of the time, are considerations. “As a result, you get a unique solution every time. I really admire that, and it’s what I always seek to do, too.”

Isozaki and Gauld collaborated on numerous projects, including the Guggenheim Museum Soho, the Brooklyn Museum, and the Bass Museum in Miami. Gauld opened Isozaki’s New York City office (he’s had others in Japan, China, Italy, and Spain) and oversaw his US projects for 10 years before striking out on his own in 1997. Gauld has since designed many public, retail, and residential spaces, mostly in New York and Miami, and like his mentor, he works in a range of architectural styles, allowing the client’s wishes, constraints, and the site to guide the vision.

Though how an architect of Gauld’s distinction came to design a home in Asheville may seem curious, it’s really quite simple: Pam and Todd Eveland are David’s sister and brother-in-law. And since this wasn’t the first house David had designed for them, it was easy for the homeowners to mostly relinquish the reigns and trust in the expert. 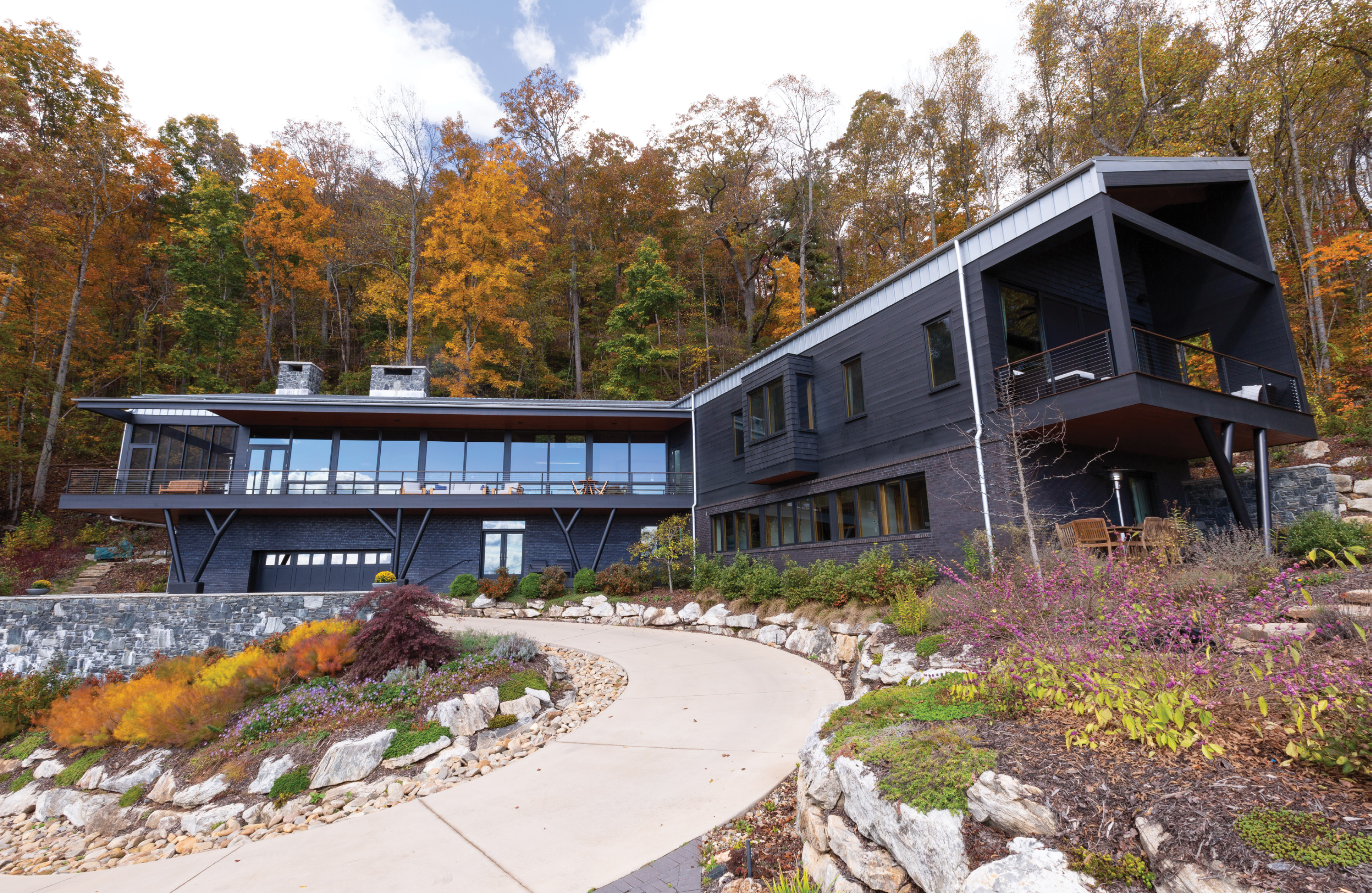 Gauld says the design of the home was inspired by the Hara Museum in Japan, which his mentor designed. Situating the house above the road and with cantilevered porches helped create a dramatic effect.

Before moving to Asheville, the Evelands had been living outside of Chicago in a home they had worked with David to design and decorate. When their previous arts-and-crafts-decorated home in Indianapolis suffered a fire, they’d lost everything, so this new dwelling was a clean slate. Pam and David would shop show rooms together in New York and Chicago, furnishing the new home with a mix of modern and transitional pieces. The Evelands eventually even built a lake cottage in Michigan’s Upper Peninsula that David designed, and which leaned heavily on the arts and crafts aesthetic, a look the Evelands and David all love for its warm nature.

In searching for a place to retire—Todd from 35 years as a PepsiCo executive and Pam from a career in psychotherapy and clinical social work—Asheville’s mild seasonal climate and progressive air fit the bill. Pam was also drawn to the resources for potters here, as she’s a hobbyist herself and makes exquisite pieces.

The Evelands had planned to buy a home, but when five mountainside acres became available close to town, they decided to build and quickly settled on a general contractor: Cottonwood Development Company out of Morganton, whose work they’d seen and loved during their house hunt.

For David’s part, the topography of the site guided the design concept. “There’s a ravine, which suggested to me this chevron shape,” explains David, “the way that the two topographies met. I wanted to nestle the two sections of the house into the mountainside in such a way that the main floor is above ground, but the lower floor would basically be below ground in the back and above in the front.” He envisioned a house with traditional post-and-beam construction sitting above the road, with cantilevered balconies for dramatic effect. The south-facing orientation opened the door for a passive solar design, which aids in naturally heating and cooling the home. And using black-painted ship-lapped cedar siding and shingles, he admits, looks beautiful in a forested setting. The dark finish is a nod to shou sugi ban, an ancient Japanese architectural technique of charring wood to preserve and weatherproof it. The look is used widely in Japan, but gaining in popularity elsewhere.

Pam and Todd’s requirements for the home were simple. “We knew we wanted four bedrooms, a hot tub. We wanted open spaces, outdoor spaces, real fireplaces,” says Pam. They enjoy entertaining and hosting their three grown children and their families from time to time, so having spaces that lend themselves to different moods and times of day were called for, and resale value was a consideration as well. But they weren’t sold on a modern home or the black exterior.

David, who was eager to pursue the contemporary design, knew Pam and Todd liked warm materials—wood, stone, earthy elements. “I had to explain that with the same materials we could create a warm, comfy, cozy environment, even in a modern style,” recalls David. To convince them, he had 3-D models of the home printed and shipped from Belgium, and in the end, the couple’s confidence in David won out, and they entrusted him to pick everything from the building materials to the furnishings. 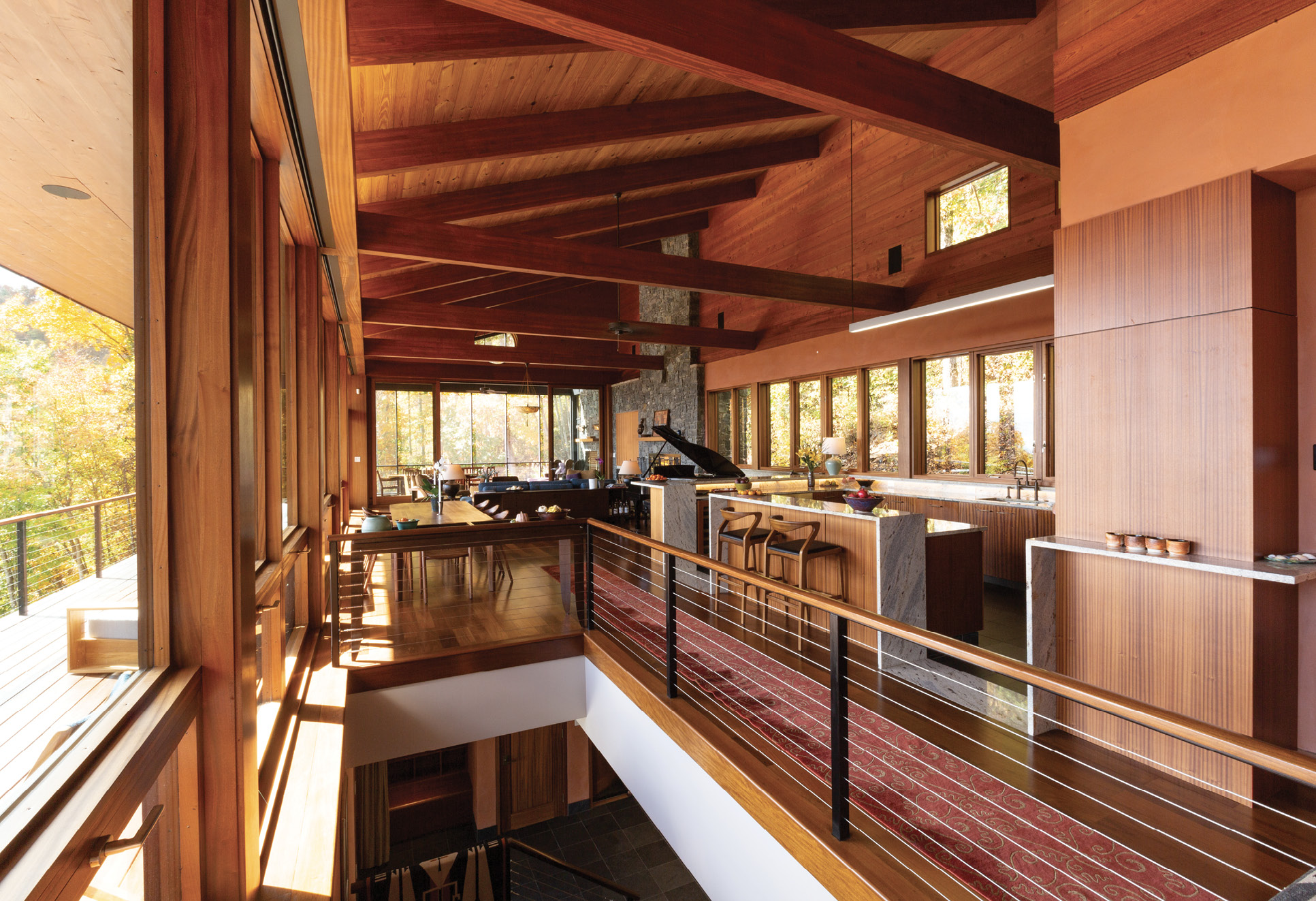 Punctuated with Kashmir white granite, the kitchen is elegant and smartly designed. Sub-Zero, Wolf, and other appliances, a pantry, and a coffee maker are all hidden behind gorgeous custom sapele mahogany cabinetry and doors.

Work began in earnest in 2014 and took three years to complete—much longer than anticipated. The Evelands were still living in Chicago, which proved challenging, and limited sub contractors, who stay overly busy in Asheville’s hot housing market, presented additional setbacks. But the first and biggest challenge, which took an additional six months of work, was to stabilize the soil.

To ensure the ground was safe to build on, foreman John Anthony (formerly with Cottonwood) called in structural and geotechnical engineers, who found not solid granite but colluvial soil—the result of an ancient landslide. This meant that a massive soil pinning operation was required to stabilize the earth before any construction could begin. A large swath of mountainside was excavated and a dozen steel rods were drilled 60 feet into the mountain, which was then sprayed with concrete to hold it all in place and completely buried. Also called soil nailing, the technique is often used in building bridges or large retaining walls. “I’ve worked on other residential projects with geotechnical engineers, but never one of this magnitude,” says John. “At the time, at least, it was the largest residential soil pinning in Western North Carolina.” Today, mature trees, shrubs, and plants now conceal any evidence of the effort.

With the danger of a landslide thwarted, construction moved along. Black bricks and local black granite joined the dark cedar exterior, adding texture, while gray retaining walls and chimneys were in accord. The landscaping began to take shape, with Todd even building some of the stone steps and pathways—a skillset he’s learned from time spent volunteering with the Carolina Mountain Club.

As promised, the interior radiates warmth and is perfectly designed for both large gatherings and quiet, restful moments alone.

The west wing contains the living spaces, with a garage, workshop, and foyer downstairs and a great room and kitchen upstairs, and floor-to ceiling windows spanning the length. A covered front porch and side screened patio with a granite fireplace make outdoor living a breeze in any season.

The east wing contains a media room, office, and bathroom downstairs, and upstairs, another bed and bath and a gorgeous master suite with its own private balcony, which overlooks the stone patio and fire pit below and unobstructed mountain views beyond. There’s even a bay window in the hallway that serves as a quiet reading nook while adding architectural interest to the overall.

In the center of the house, where the contours change direction, is a covered patio with a hot tub spa. Since it’s situated on the home’s northern side and tucked into the mountain, it’s private and stays cool, even on the hottest of days.

Throughout the house, earthen elements abound. Brazilian ipe wood was chosen for the floors and decks; sapele mahogany for the doors, trim, and Duratherm hardwood windows; and pine roof decking for the ceiling, with uplighting concealed in a cove, accentuating the soaring pitched ceiling. American clay plaster David chose over stucco for the walls, and Kashmir white granite comprises the fireplace hearths, kitchen counters, and windowsills. Emperador dark marble, ivory onyx, and black slate were used selectively in other areas, rounding out a mix of building materials that lend texture, beauty, and warmth to the home.

For the décor, since David had selected furniture for his family’s previous homes, he was able to pull from Stickley, Barbara Berry, and other pieces the Evelands already had, while choosing transitional and modern furnishings to develop an eclectic look that works with the overall aesthetic. With the exception of two sofas David sourced from Milan during a trip there, the rest of the furniture he found at showrooms in New York, their origins touching many parts of the world—chairs and stools from Brazil, armchairs from Serbia, the dining table from Bosnia, hand-knotted carpets from Nepal. “I was able to get them pieces the average person would never know about,” says David, pointing out that many of the showrooms are not open to the public and some companies only work with designers.

While Pam admits she and Todd were apprehensive, “We love it now,” she says. Todd enjoys the ipe floors and outdoor living spaces, especially the privacy of the master balcony. Pam loves the light, the windows, and the views. And they both enjoy the location and solitude afforded at the end of their winding road. “I’ve made a lot of mistakes in my life,” says Pam, “but choosing where to retire isn’t one of them.”

Fri Sep 10 , 2021
Last updated:September 9, 2021 This is my final article in a series about housing affordability. In previous articles, I talk about the role of the property industry in the housing affordability crisis, public housing’s role in reducing poverty, the tax credits that are shaping our affordable housing industry, and the […]