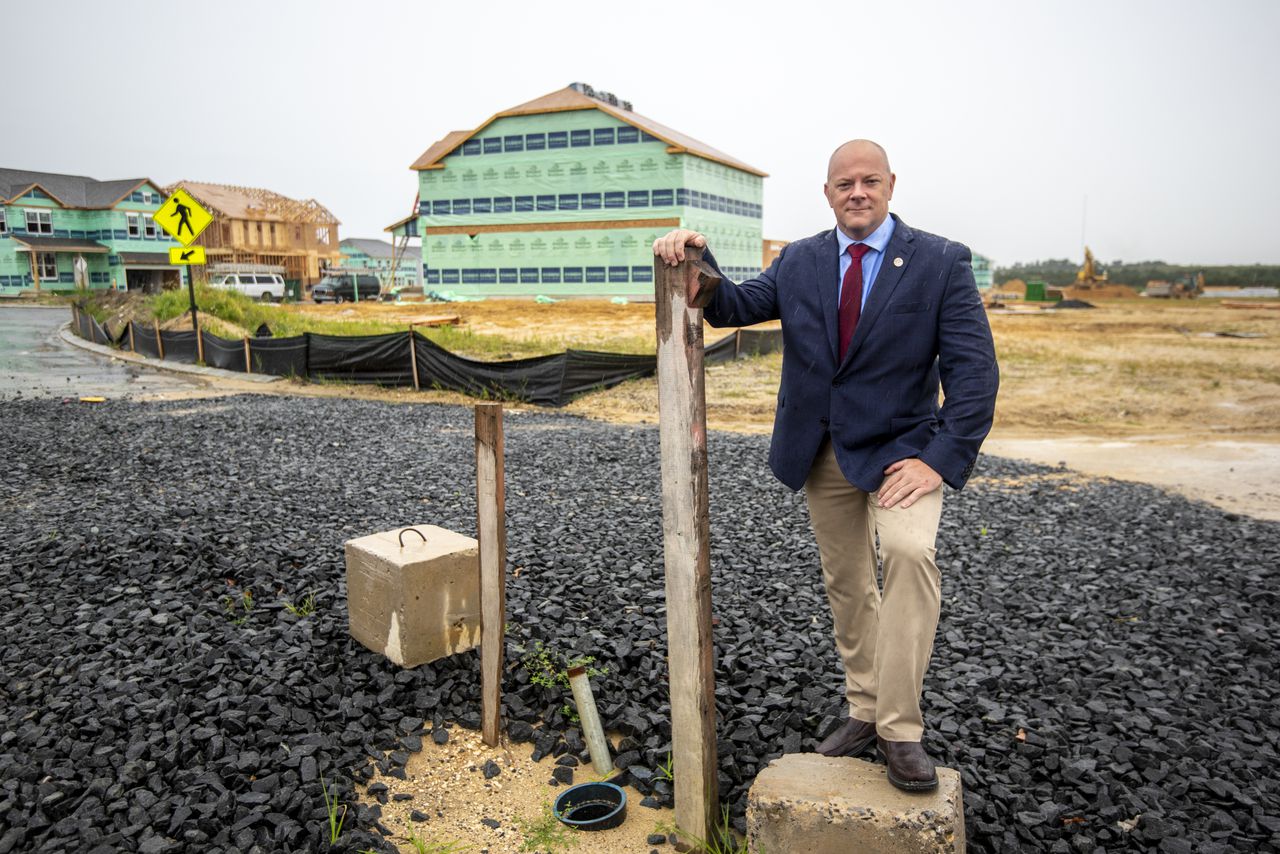 It didn’t matter that it was raining in Stafford Township. There were houses to build.

Despite the alternating drizzle and downpour on a recent Friday morning, workers used earth movers to spread gravel on sandy soil, stood on ladders nailing plywood panels onto 2-by-4 frames, and wrapped the freshly built walls with green plastic waterproofing sheets.

Whole blocks of houses at a time are being constructed in the township’s Manahawkin section, just off Exit 63 of the Garden State Parkway. They’re going up in a community known as Stafford Park under a multi-phase redevelopment plan adopted in 2006 for 345 single family houses, plus 310 apartments, on a 350-acre area site surrounding the capped Stafford Township Landfill.

Stafford Park’s designated developer is the Walters Group of Barnegat, though the single-family portion of the site is marketed as Stafford Park by D.R. Horton, after the Arlington, Texas-based construction giant that is building the houses.

Stafford, a southern Ocean County township with 46 square miles of land, is experiencing what is just its latest in a series of growth spurts over the past half-century, when the population grew from roughly 3,700 in 1970 to an estimated 28,000 or so in 2019.

The first two residential phases of Stafford Park include 224 single-family homes most of which have been completed, while another 121 houses are planned under a third phase approved last month by the Stafford Township Planning Board.

Stafford issued more building permits for 1- or 2-family houses than any other municipality in New Jersey in 2020, with a total of 356, according to New Jersey Department of Community Affairs data. And township officials say Stafford Park was by far the biggest single contributor to that total. Stafford was representative of Ocean County, which led all New Jersey counties in 1- or 2-family home permits in 2020, with 1,886, more than twice as many as its nearest rival, Monmouth County.

(The DCA does not provide data for single-family home permits only, and instead groups permits for 1- and 2-family homes into a shared category. There is a separate category for multi-family units. Stafford did not issue any in 2020.)

Lakewood Township, in northern Ocean County, awarded the second highest number of permits for 1- or 2-family homes in the state last year, with 300, according to the DCA.

But while a sustained building boom in Lakewood has been attributed to its growing Orthodox Jewish population, Stafford officials and the township’s principal developer say Stafford’s new arrivals have been a diverse group of no particular religious, ethnic or other trait, except possibly the desire to live in a newly-built home right off the Garden State Parkway and just across Barnegat Bay from Long Beach Island.

“There’s a lot of people coming in, actually, from other parts of Ocean County,” Mayor Greg Myhre told NJ Advance Media during a visit to Stafford Park on Friday. “You get a lot of people from Toms River that want to move down here. Other parts of the state as well. Also from New York.”

The lagging supply of houses for sale in New Jersey has contributed to a rapid rise in home prices attributed to increased demand for single family dwellings driven at least in part by buyers fleeing more densely populated for more space amid the coronavirus pandemic. And in a kind of catch 22 at the intersection of the housing market and the pandemic, that shortfall of new homes has been blamed on a scarcity of lumber and other building materials caused by supply chain disruptions also linked to the deadly virus.

But industry professionals cautioned against making too direct a connection between the pandemic and either last year’s dip in building permits issued statewide or Stafford’s state-leading number, noting that permits come at the tail end of development processes that can take years, long predating the March 2020 COVID-19 outbreak in New Jersey.

“It takes an extremely long time to get through the regulatory environment and development approval process in our state, so permits issued in 2020 were likely the result of projects years in the making,” Grant Lucking, chief operating officer at the New Jersey Builders Association, said in an email.

“Unfortunately, NJ’s structural impediments to housing production are not likely to be addressed in the near term and the shortage and increased costs of materials and labor are only making it more difficult to increase the supply of affordable units.”

In addition, the dip in statewide permits as well as the relative strength of housing construction in Stafford and Ocean County as a whole are both representative of long-term trends in home construction that date back as far as the data’s been tracked.

A spokesperson for N.R. Horton, the nation’s largest home builder by volume, declined to comment.

But Walters Group founder Ed Walters said home construction in Stafford Park was unlikely to have been slowed by the pandemic because of Horton’s size and nationwide scope, which gives it extraordinary access to labor, lumber and other supplies that smaller, regional builders may not have.

And while the increased cost of materials even for a high-volume buyer like Horton has doubtless driven up the cost of houses, Walters said demand is so strong that sales do not seem to have slowed as a result.

Walters said Horton purchases individual lots from his company, then builds houses and sells them as demand dictates. He said Horton had purchased 228 lots as of Friday dating back to 2018, and had completed or begun construction on all but a dozen of them.

Neither Myhre nor Walters knew the number of people living in Stafford Park. But if it the area is consistent with the township’s 2015-2019 average of 2.51 occupants per household, then the total of 165 single-family homes and 310 apartments could put the new neighborhood’s population at 1,200 or more, depending on the size of the families moving in.

Walters, who is 59 and grew up in Surf City, said it felt “pretty awesome” to think that he had presided over the creation of a community basically from scratch, on an empty expanse surrounding the same 55-acre landfill where he dumped construction debris from the back of his pickup as a young contractor in the early 1980′s. The landfill was closed in 1983, and capped by Walters late in the last decade under the redevelopment plan.

“We started the process in 2003,” he said of the plan. “I would drive over to the Stafford landfill and empty my trucks out. And back in 1983, never did I think I would be the guy capping the landfill.”

Not everyone is as pleased with the growth of Stafford Park or other parts of Ocean County.

In addition to lying within the environmentally sensitive 1 million-acre Pinelands National Reserve, Stafford and other parts of the county abut Barnegat Bay, which environmentalists say has been polluted by the increasing amount of stormwater that runs off rooftops, driveways, roads and other impervious surfaces gradually covering over the region’s sandy soil.

“In a variety of ways, New Jersey gave up on trying to protect Barnegat Bay,” said Carlton Montgomery, executive director of the Pinelands Preservation Alliance, a private watchdog group.

Walters and Myhre said it was possible that at least some of the demand for houses in Stafford Park was driven by families’ COVID-related desire for single-family homes with yards separating them from their neighbors.

And that demand had fueled a rapid rise in home prices, approaching levels traditionally associated with areas farther north. A newhomesource.com listing for Stafford Park homes, for example, priced models of 2,015 to 3,242 square feet at between $528,550 and $624,605.

“You have a lot of greenery, proximity to Long Beach Island,” he said. “And you’re still right off the Parkway.”

As Myhre stood in the rain near the base of a weather-beaten water tower that looms over Stafford Park, he called the area Stafford’s “frontier,” because it borders a broad swath of vacant land beyond it to the south of Route 72 and west of the Parkway. The water tower will be taken down and rebuilt elsewhere by the Walters Group, which will install a park with a playground and ball fields in its place.

Apart from the redevelopment plan, long before houses began sprouting like mushrooms in the rain, Walters developed the 400,000-square-foot Stafford Park Shopping Center, a collection of box stores that includes a Costco, Target, Best Buy and Dick’s Sporting Goods built a decade ago.

Joseph Lowry, a vice president at Levin Management Corporation, which manages the center, said in a statement that the new homes were, “a natural, built-in traffic driver.”

Houses in the Stafford Park redevelopment area began going up following approval of the first phase of the plan in 2017, calling for 74 single-family units. The ones being built in the rain that Friday were part of a second residential phase approved the following year that includes an additional 155 SFUs.

And last month, the Township Planning Board finalized its approval of a third residential phase of the project, with 121 houses on a 37-acre tract.

While Stafford Park awaits its own playground and ballfields, Myhre said residents use other township facilities, send their children to Stafford Township Public Schools, and otherwise engage with the broader community, in the Manahawkin section and beyond. A “Stafford Park (Manahawkin, NJ)” private Facebook group with 226 members created in 2019 was evidence that a spirit of community had taken root in the new neighborhood.

If not for the white ventilation pipes that sprout a few feet above its surface, it might look to the untrained eye like a grassy hill. It’s partially surrounded by leafy trees and other natural-looking growth, plus a row of young pines planted at regular intervals between the landfill and the streets of Stafford Park, including the end of one cul-de-sac that comes within a hundred yards or so of the covered dump’s perimeter.

There was no detectable odor from the landfill on the mild, rainy morning NJ Advance Media met with the mayor. Myhre, 46, a Republican who was elected in 2018 as the head of a Republican Township Committee slate and is up for re-election in November, said he hasn’t received any complaints of odors.

And certainly the SUVs and basketball hoops in the driveways of Stafford Park’s spanking new homes — not to mention the houses under construction nearby — were indications that the landfill had not discouraged growth of the new neighborhood. “It’s been closed for coming up on 40 years,” said Myhre, who lives in the township’s heavily developed Ocean Acres section, north of Stafford Park. “I’m up here over in the shopping area several times a week, and I’ve never smelled anything.”

Nobody knows Jersey better than N.J.com. Sign up to get breaking news alerts straight to your inbox.

Steve Strunsky may be reached at [email protected]